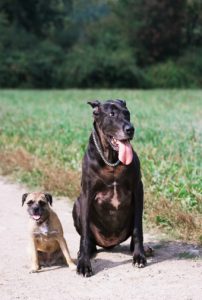 Ages 3 weeks to 12-14 weeks are THE most critical developmental stages of life for puppies – This is the SOCIALIZATION PERIOD. Dogs MUST BE EXPOSED to other dogs from ages 4 to 6 weeks. Dogs MUST BE EXPOSED to people from ages 6 to 12 weeks. Experts used to think we had until the dog was 16 weeks to socialize him to people, but they’ve discovered this to be inaccurate. If we fail to sufficiently socialize our puppies at this age to all sorts of dogs and all sorts of people, we will wind up having a dog that is always scared of other dogs and people. Now you can see why it’s so important for breeders to do what they’re supposed to do during these critical ages. I’ve gone into homes to train puppies where they didn’t get the puppy from the breeder until he was 12 weeks old. This happens a lot with the toy dogs. But if the breeder didn’t expose the dog to enough people, guess what happens? The dog becomes shy and fearful, which can lead to aggressive behavior. Irresponsible breeders set the dogs up to fail if they keep them too long and don’t socialize them.

During the socialization period, puppies need to be exposed to all situations that it’s likely to encounter during its life. THIS is the time to take your puppies to puppy kindergarten classes. Don’t let your vet talk you out of going to classes at 9 weeks. Although there is SOME risk of health problems, the risk of your dog developing fear and defensive behaviors due to lack of socialization is much too risky. MORE DOGS DIE TODAY, NOT FROM DISEASE, BUT FROM BEHAVIORAL PROBLEMS DUE TO LACK OF SOCIALIZATION.

If we miss the opportunities to socialize our puppies and to teach them certain things at this age, we can retard their development and ability to learn in the future. Much of the aggression we see in dogs is the result of insufficient socialization to other dogs and humans by the time the dog is 12 weeks old. Socializing your puppies doesn’t mean just casually introducing them to your family and friends. You need to get these dogs out and about and in as many public settings as you can. However, don’t do this all in one day, PLEASE. You should be introducing your new puppies to 5 new people every week, and then 5 more, and so on as he goes through the socialization period.

Researchers, Drs. Scott and Fuller state that puppies should never be adopted before 6 weeks of age, and best not before 7 weeks. The puppies need to be interacting with their littermates prior to those weeks is very important in their development.

At around 8 to 10 weeks, puppies go through a fear period where it’s very susceptible to physical and psychological trauma, and if something bad happens during that 2 week period, the effects could be permanent and irreversible. That’s why it’s best to get your puppy around the 8th or 9th week, so that YOU can control what’s going on in his life. Dog’s who experience abuse at this age, or if they have bad experiences with vets or other dogs, or ANYTHING that causes them emotional or physical harm, this poor dog will be traumatized for life by those scary events. Maybe now you’ll realize that punishing your puppies for housetraining accidents when they’re going through this fear period can cause terrible problems with your relationship. If you scare him by punishing him now, he will never fully trust you.

Here is a list of ALL of the things you need to expose your puppies to during that socialization period of 8 to 12 week period:

Sights would include trees, insects, other animals, men with beards, women in hats, people in wheel chairs, people with canes, and many children. Sounds like traffic, airplanes and trains, railroad crossing signals, construction and the sounds of children playing. Various recordings of sounds are commercially available and very useful for this. Especially important is to get your puppies used to the sound of rain and thunderstorms. CD sound effects are great for this. You can purchase these CD’s at: http://www.dogwise.com/ItemDetails.cfm?ID=DTB653

If your 8 to 12 week old puppy is kept in his kennel most of the time, he’ll become fearful and hard to rehabilitate!! This would equate to the infant who is given little or no mental stimulation. They become mentally disabled for life.

Now we come to the time that will try men’s souls – the canine period of adolescence – YIKES! This is when you want to go on a cruise around the world and not come home until your dog is at least 2 years old! When your puppy becomes 4-5 months old, you’ll notice that he becomes VERY independent. The puppy that wouldn’t leave your side now won’t come to you anytime you call him. When he was a bit younger, he was so easy to train, but from 4 to 10 months, he may become fearful and cautious even to people and novel things he was fine with before (this is the 2nd fear period that dogs go through). If you were training him early on, that will pay off now because he will trust you to guide and protect him through this.

NEVER  PUNISH YOUR DOG FOR BEING AFRAID OR YOU CAN TOTALLY RUIN THE DOG!  Your dog is always looking to you for guidance and encouragement, especially if he’s fearful. If you scold him because he isn’t comfortable meeting Uncle Joe, you will only convince him that Uncle Joe is not a good thing!