How often have you heard someone advise you to “Just let them work it out themselves when your dogs get into fights at home!” I’m here to strongly advise you NOT to take that advise from anyone, even well-meaning relatives, friends, or neighbors. People mean well when giving advice, they really do. But… here are just two dog-fight situations where owners called me for help and advice:

In one household, the smaller dog constantly barked at the larger dog. She tried to steal the larger dog’s food and toys too.  Owner explained that the larger dog was always “correcting” the smaller dog, so he allowed that because no serious fights had occurred and he figured he did not need to intervene. However, the other day, the  small dog needed to be hospitalized in intensive care due to suffering from very serious bites on several areas around her throat inflicted by the larger dog. Thankfully, this dog survived her injuries.

In the second household, two large-breed dogs had lived together as housemates for several years. Owner explained that one dog was always picking on the other and they have had some fights, but not serious ones. The owner had followed someone’s advice to “let them work it out themselves.” The owner contacted me because the night before her call, the two dogs got into a deadly serious battle. Both dogs bit each other around the throat, but the worst wounds they both inflicted to each other were to their legs that are now extremely swollen and sore.

My advice was to contact a Veterinary Behaviorist as soon as possible. All these dogs need to have a complete wellness exam in order to rule out any medical issues that may have caused such extreme fights to occur.

When dogs bully their housemates or instigate fights, these behaviors wind up being self-reinforced over and over again! Whoever the bully might be, that dog learns they can succeed at being a bully. Meanwhile, the dog that is bullied is under almost constant stress. Then one day, a crisis occurs such as the two cases I’ve shared with you. Always remember that dogs are animals and think like animals! They have no morals! They never feel guilty about doing any behavior, despite what their body language may indicate to you (like cowering when being hollered at). Never, never let dogs work it out themselves. Make sure to take charge of these situations in order to prevent them from happening in the first place. I tell all of my clients who are dealing with any problematic dog behaviors to PREVENT, PREVENT, PREVENT them. 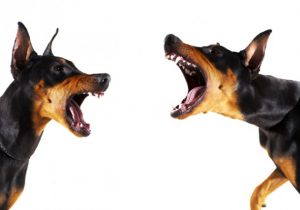